How did it all start?

Kemikalio- ja maustepalvelu began working with spices on 17 July 1948 under Osuusteurastamojen Tutkimuslaitos in Kuopio. Fritz “Piki” Niinivaara was chosen as the research institute’s director. The institute developed its own product to prevent blood coagulation – Verisuola (“blood salt”). Verisuola was patented in 1987, and it is still manufactured using almost the same recipe. Verisuola was followed by other products, such as an intestine bleaching agent and lohisuola (“salmon salt”). 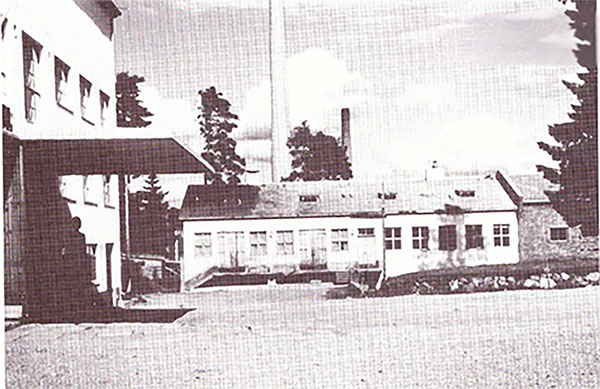 In 1951, the research institute delivered a total of 12,618 kg of chemicals and spices to cooperative slaughterhouses.

The research institute and Kemikalio- ja maustepalvelu moved from Kuopio to Hämeenlinna at the end of 1951 and in early 1952. Operations were resumed in the new premises in January 1952.

In the summer of 1952, the decision was made to start manufacturing and selling the company’s own phosphate additive mixtures for meat products, which turned out to be a great success story. The name given to the new product was Sitonal®.

Spice grinding became a key part of Kemikalio- ja maustepalvelu’s business operations. For this purpose, powerful new grinding mills were purchased. Spices in liquid form were introduced alongside the dry, ground spices, but these were discontinued in the early 1960s. Maustepalvelu took a new direction in the 1950s, developing, mixing and selling sausage spice mixtures.

Sausage spices, phosphate mixtures and their development took centre stage. Competition, especially in phosphates, was getting tougher on the market. 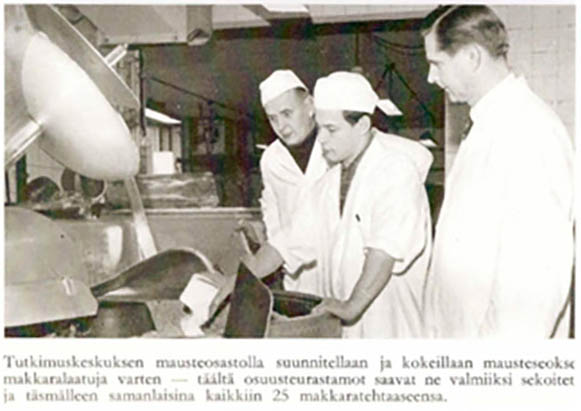 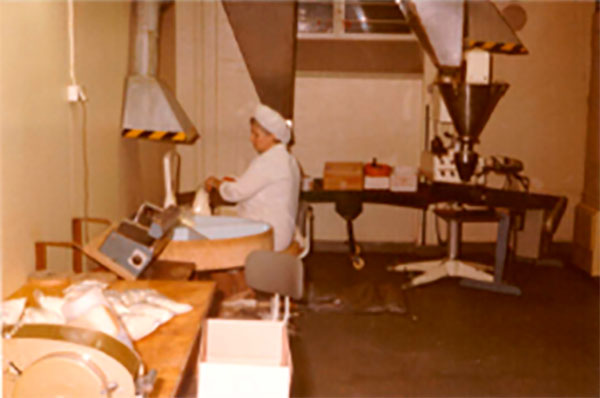 The first Maustetoimikunta convened in 1969, with the purpose of acting as a connection between and discussion forum for Kemikalio- ja maustepalvelu and users of the products.

Manufacture of mixtures for minced meat 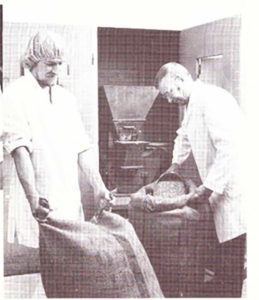 LTK’s name was changed to Lihateollisuuden Tutkimuskeskus ry (“Meat industry research centre”). The name Kemikalio- ja maustepalvelu was dropped and replaced by simply Maustepalvelu, and on 1 January 1982, Maustepalvelu was officially made into a TLK department operating under LTK.

JThe manufacture and delivery volumes of mixtures used for minced meat products increased steeply. In 1982, TLK leased old premises from Lounais-Suomen Osuusteurastamo (“Cooperative slaughterhouse of Southwest Finland”), LSO. The slaughterhouse operations had already been discontinued there earlier. Maustepalvelu used what had previously been the cowshed, slaughterhouse area, and cellar.

The raw materials were stored in the former cowshed, while the slaughterhouse area was well suited for the conical screw mixer. Later, another conical screw mixer was purchased. These premises are still used by Maustepalvelu, while the mixers were later moved into a production area created from a former LSO meat-cutting and service facility.

New spices on the market

The products introduced to the market included pizza spice, chicken BBQ sauce, new spicy sauces, and spices for the fillings of deep-fried stuffed pastries. For the packaging needs of GATRIAN spice products for commercial kitchens, a Pure Pak carton creation and sealing assembly line was obtained, complete with a screw feeder suitable for powdered products. 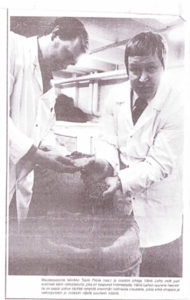 At LTK, as part of joint product development with Atria products, uncooked whole-meat products ready for the oven were developed to make cooking easier for consumers. One particularly successful product was Porsaanpaisti á la Atria (Atria’s pork roast). This was spiced with a marinade developed by LTK’s product developed group, mixed, and packaged by Maustepalvelu. Marinade production started yet another success story in the commercial history of Maustepalvelu. 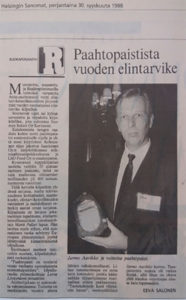 As an extension to the production facilities, a new production and office building was designed for the plot leased from LSO. In 1985 and 1986, a production building of 670 square metres was constructed. In autumn 1986, all raw materials were moved into the new building, including mixing and packaging functions and offices from the LTK building.

In 1991, the local cooperative slaughterhouses decided to discontinue the operation of TLK. This eventually resulted in the creation of two competing meat companies, which are today called Atria Plc and HKScan Corporation.

A solution had to be found in order to continue the operation of Maustepalvelu, which had been operating as a department of TKL since 1982, and the decision was made to start a company called LTK-Maustepalvelu Oy, which continued the operations of TLK’s Maustepalvelu division. Maustepalvelu became, for the first time in its history, an independent company, with an owner, management and normal business opportunities.

Following corporatisation, Maustepalvelu began more active services for products, product development services, and tailored mixtures for Finland’s entire meat and convenience food sector. Maustepalvelu’s staff numbers increased significantly after corporatisation. Once they controlled the operations themselves, changes were also made in raw material purchase and supplier cooperation. This resulted in even closer cooperation with suppliers. Testing of and competitive tendering for ingredients began in earnest, and Maustepalvelu began to apply for representation or exclusive-sale products for the Finnish market.

In 1993, Maustepalvelu bought all the 1950s buildings at Luukkaankatu 6, Hämeenlinna, and the following year, also the plot from LSO. This meant that Maustepalvelu was now using the property of a former slaughterhouse, meat cutting plant and sausage factory, and a production facility completed in 1986.

Maustepalvelu’s production and sales volumes continued to grow fast, so a three-storey extension was built in 1995, combining the old 1950s brick building with the production facility built in 1986.

Maustepalvelu was granted its first quality certificate in 1998.

In 1999, Maustepalvelu’s net sales were approximately 90 million Finnish markka, with a staff of 43. More than 400 raw materials were already being used.

More and more was invested in quality aspects of the work in the 2000s. An HACCP self-monitoring project was started to complement the ISO 9901 quality system already granted to Maustepalvelu.

A new test factory was completed in 2001 on the premises of a former meat museum. This contributed to the product development and marketing of the convenience food sector in particular. The office premises were expanded further in 2000 by building a warehouse for outgoing goods. In addition to this, the raw materials receiving area on the east side was expanded by building an off-loading bay and a raw material storage area.

The number of raw materials increased to 500 items. Product development was expanded to include functional foods and their ingredients.

In 2002, an environmental certificate complying with ISO 140011 was awarded to the company. Maustepalvelu set a target that 60% of its waste should be combustible energy waste.

The number of raw material product names continued to rise steeply, as did the number of tailored mixtures. The production facilities and machinery were again expanded by investments of EUR 4 million in 2011–2012.

In 2021, Maustepalvelu began a new expansion as part of a larger investment plan. New premises were leased in Hämeenlinna, comprising thousands of square metres in the Kantola industrial area. Construction began in Luukkaankatu, next to the existing premises, for a 12-metre-high logistics and warehouse building. 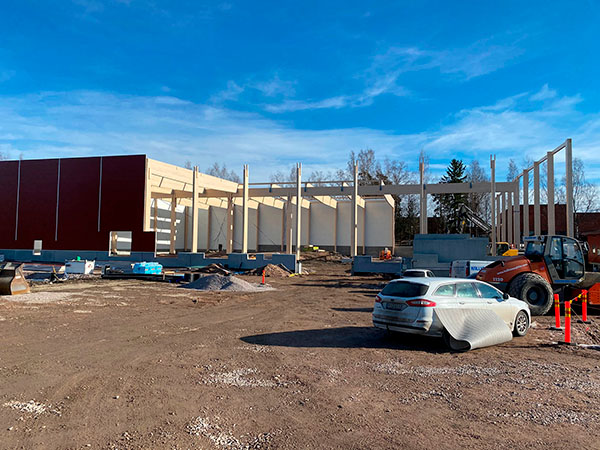 The Maustepalvelu investment plan will be continued in 2022–2024. Maustepalvelu will invest in higher growth and quality by, for example, buying new mixing equipment and by changing production methods. Production will take better account of allergens in particular, and management of contamination by them.

Barentz group made some changes in the internal structures of operations in MP-Maustepalvelu Oy:n and Casmo Oy. Casmo Oy, owned by Barentz, changed its name to Barentz Finland Oy on 1 January 2022, focusing in future on the sale of its own raw materials and those of Barentz’s clients, and on the development of these operations. Maustepalvelu, on the other hand, will focus on its core expertise, spice mixtures and the development of such operations in Finland, and specific export sectors.

Maustepalvelu’s first sustainability report was completed in 2019, since when sustainability issues have been in focus more and more. In August 2021, for example, Maustepalvelu went over to using only wind energy, contributing to a key component of its sustainability goals, management of energy consumption. 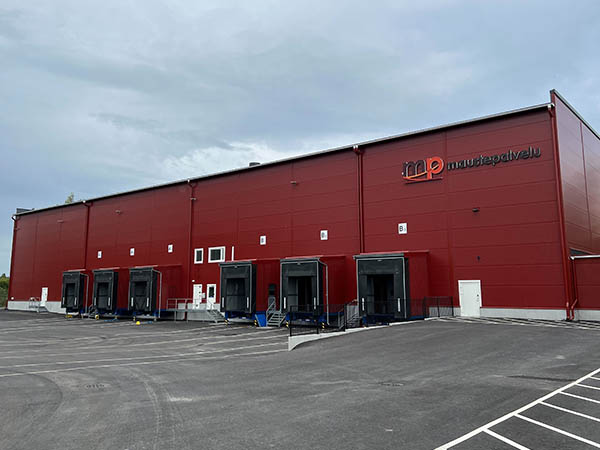 This historical review is based on background work done by Maustepalvelu’s former managing director, Jarmo Aavikko.